The importance of John Lions to computing history has spanned decades and continues to do so. In 1976 he published, through the University of New South Wales, the Lions' Commentary on UNIX 6th Edition, with Source Code. The book was both explanatory for the UNIX kernel, but also as a teaching tool. The content was extraordinarily well-written, explaining difficult concepts with a remarkable coherence and also engaging in an early form of instructional scaffolding.

For the third time in the past year I have sat down to watch "The Wind Rises", the fictionalised biography of Jiro Horikoshi by Hayao Miyazaki and animated by Studio Ghibli, the title derived from a line in Paul Valéry's "The Graveyard by the Sea", "Le vent se lève! Il faut tenter de vivre!" In this tale, Jiro is an engineer who follows his childhood dreams of designing aircraft. However, the setting is imperial Japan in the 1930s and Jiro's employer, Mitsubishi, is under direction to build efficient planes for the purposes of warfare.

When I rage-quit, I don't mince my words.

I am going to have to withdraw from the XXXXX and the XXXXX course.

The content that has been provided from the latter is infuriating. It is everything that I have considered wrong in teaching computing tools over the past twenty years, and have witnessed ever-increasing numbers of learners who leave such courses who are increasingly ignorant of IT systems.

As dataset size and complexity requirements grow increasingly researchers need to find additional computational power for processing. A preferred choice is high performance computing (HPC) which, due to its physical architecture, operating system, and optimised application installations, is best suited for such processing. However HPC systems have historically been less effective at the visual display, and least of all in an interactive manner, leading into a general truism of "compute on the HPC, visualise locally". 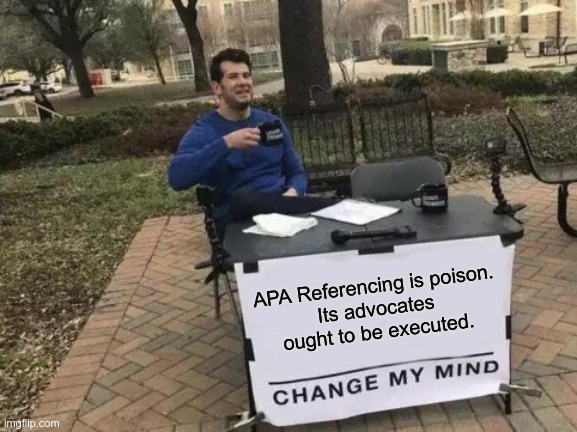 There is much that irks me in academia. The way that disciplines are almost randomly assigned to artium, scientiae, or legum, without any reference to their means of verification or falsification. Or, for that matter, the Dewey (or Universal) Decimal Classification for libraries, which, in its insanity, places computer applications in the same category as "Fundamentals of knowledge and culture" and "Propaedeutics". One could also describe ask why the value "Dead languages of unknown affiliation" also belongs with "Caucasian languages". I suppose most of them are "near dead", right?

Then there is the eye-watering level of digital illiteracy among academics, researchers, students, and professional staff. It is little wonder that closed-knowledge academic journals and proprietary software companies fleece the university sheep and make out like bandits. They don't even realise that they've been robbed, such is the practical ignorance of the lofty principles that they espouse. Ever received a document in a proprietary format explaining how important it is to make content accessible for the visually impaired? Yeah, it's like that all the time, a combination of hypocrisy combined with willful ignorance.

But I reserve a special spot in my hell for referencing systems.

"EAZY is a photometric redshift code designed to produce high-quality redshifts for situations where complete spectroscopic calibration samples are not available", which is a pretty excellent project. However, it has a few issues that are illustrative of typical problems when developers aren't thinking in terms of operations. I like this software, it carries out a valuable scientific task with ease, which will be awesome in an HPC environment, especially when run as a job array.

A common need among those who engage in large scale image processing is to assign a watermark of some description to their images. Further, so I have been told, it is preferable to have multiple watermarks that have slightly different kerning depending on whether the image is portrait or landscape. Thus there are two functions to this script, one for separating the mass of images into a directory into whether they are portrait or landscape, and a second to apply the appropriate watermark. The script is therefore structured as follows and witness the neatness and advantages of structured coding, even in shell scripts. I learned a lot from first-year Pascal programming.

With annual conferences since 2007 eResearchAustralasia was hosted online this year, due to the impacts of SARS-CoV-2. Typically conferences are held along the eastern seaboard of Australia, which does bring into question the "-asia" part of the suffix. Even the conference logo highlights Australia and New Zealand, to the exclusion of the rest of the word. I am not sure how eResearch NZ feels about this encroachment on their territory.

Like an increasing number of Australians I'm not going to partake in the Melbourne Cup "the race that stops a nation", at least not in a traditional manner. Such events cause trauma and death on the track, often enough, and the last race is always to the knackery. The horse racing industry is unnecessary and cruel.

I'll just leave this here for those who want to learn more:

As datasets grow in size and complexity faster than personal computational devices are able to perform more researchers seek HPC systems as a solution to their computational problems. However, many researchers lack the familiarity with the environment for HPC, and require training. As the formal education curriculum has not yet responded sufficiently to this pressure, leaving HPC centres to provide basic training.