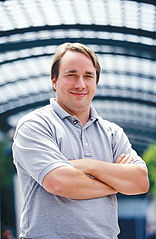 According to Wikipedia, Linus Torvalds once said "The future is open-source everything". However the original link from that page is broken. Thanks to some investigation by John Vanderberg, the original quote was placed in the page January 2005, by Stirling Newberry. One can also find the quote in several books including Matt Mason's The Pirate's Dilemma, 2008., Prasidh Mishra's Managing Electronic Resources, 2011., Steven Heller and David Womack's Becoming a Digital Designer, 2011., among many others. Even Cambridge University publishes the remark.

However, try as I might I could not find an original source for the quotation. Keith Curtis, who included the quote in After the Software Wars, 2009., readily admitted to me that he "didn't bother to always find original sources for many quotes". So did Linus Torvalds actually say this or not?

As he often does, albeit with a slight element of surprise for many attendees, Linus Torvalds attended Linux Conf AU. I caught up with him after the presentation Dirk Hondel on developing a subsurface diving log. As is well known, if you actually have sensible to say, Mr. Tolvards is quite approachable. So I asked him whether he made such a remark. After all, one should go a primary source whenever possible.

A new book has been released on J.J (John James) Clark has been published by NewSouth Publishing, and authored by Andrew Dodd.

The Railways Standing Committee accompanied by the Minister for Water Supply (Mr Swinburne) and the Mayor and councillors of Kew yesterday inspected the Kew Lunatic Asylum grounds through which it is proposed to construct a railway from Collingwood junctioning with the disused outer circle railway at Willsmere.

Samuel Amess was the stonemason who received the contract to build Willsmere, constructed between 1864 and 1872. Initially planned according to the design of G.W. Vivian and Frederick Kawerau of the Victorian Public Works Office, worked was halted almost immediately with reports of inferior works on the foundations. An investigation followed and Frederick Kawerau resigned. Samuel Amess was brought in and continued construction using Vivian and Kaweru's designed.

There is something sublime is Australia's favourite sports; whether it is the extraordinary pace and skill of Australian Rules football, or the sublime ritual that makes up cricket, these pastimes have a strange beauty.

Meeting Sir Tim Berners-Lee is a little like meeting Johannes Gutenberg in recognising an inventor who has fundamentally changed the way we engage in engage in communication and provide information. As a person who has been interested in the pragmatics, phenomenology, and political economy of such technologies for more than two decades, the lure was two strong, listening to his speeches at both ANU (for LCA) and the University of Melbourne, where he spoke on various contemporary developments especially on the legal circumstances surrounding the suicide of Aaron Swartz.

To get one issue out of the way, as many have remarked, TBL is not a great public speaker. He speaks quickly, tangentially, and without a conventional narrative - not unlike his own invention. But that's a rather trivial concern for who we're dealing with here. Anything more than a passing criticising of the inventor of the world wide web for poor public speaking skills is not unlike criticising Martin Luther King Jnr, for not inventing the world wide web. It should be added that on one-to-one questions and answers that he is able to focus his knowledge exceptionally well.

OpenCV (Open source Computer Vision) is a library of algorithms and code for computer vision with extensive documentation and books.

Snopes.com, the "Urban Legends Reference Pages" is an excellent site for debunking said material. Email chain-letters particularly annoy me because people simply don't do any verification testing at all; a particularly bigoted and false email circulated prior to the last Australian census is one which particularly annoyed me. Although I was even more annoyed when one person showed complete indifference to the facts and continued circulating said email. Almost made me want to become an imam out of spite towards the vile bigot.

Installation of OpenFOAM (and Paraview) can be carried out through several different methods, depending on the user's desires and the Linux distribution and package manager that is being used. Essentially there are three main methods; either installating with the Advanced Packaging Tool (apt) common on Debian, Ubuntu, Mint, etc., with various front-end implementations (e.g., aptitude, Synaptic, Ubuntu Software Center), the Red Hat Package Manager (rpm), common on SuSE, RHEL, Fedora, CentOS, Mageia, etc., with its front-ends (e.g., yum, up2date, urmpi), and compiling from source.

The installation of the chemical simulation suite, Schrödinger on high performance computer systems is hardly unusual. What is problematic is when users wish to access the GUI package, maestro, remotely using x-windows forwarding. Except when a user is extremely close to the system it is extremely likely that the graphic representation will be frustratingly slow for manipulation. There is, however, some ways around this.